I do enjoy a good cowl.  It breaks up the monotony of a t-shirt and makes a comfy top look professional enough to wear to work.  It’s also a quick project I can make when I’m feeling like I have nothing to wear to work that day!

It all comes down to this lately for me:  I love the sun, I live in the East Bay for a reason, it’s been raining LOTS (of course we need it), I don’t see any sunshine, I’m feeling very unmotivated and need lots of comfy things to make me want to do ANYTHING.  On top of it I’m sick like every other week too.  Ok.  Whining over, but you get why I immediately had to have the Beauty Boatneck top by Stitch Upon a Time, like now.

I don’t usually buy a pattern right when it’s released because I have so many patterns already, but this top looks sooooo comfy! I also have the perfect fabric for it, so I could actually make it before I went to work at 4pm!  It’s a soft and thick double knit I picked up at JoAnn’s last year for a cardigan that I never got to.  It has these really cute little snowflake looking things on it that are perfect for winter. 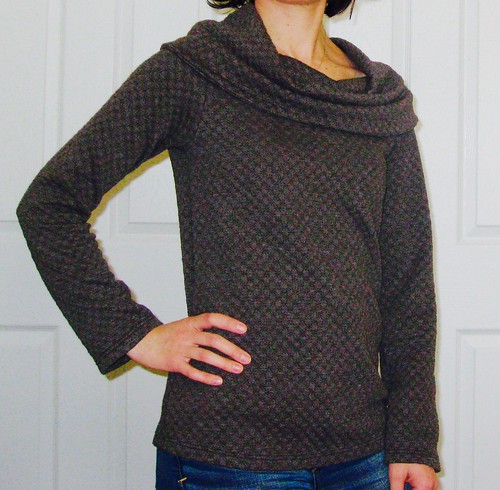 I made the cowl neck version in a size XS.  It was super easy to assemble on my serger, like seriously less than an hour. 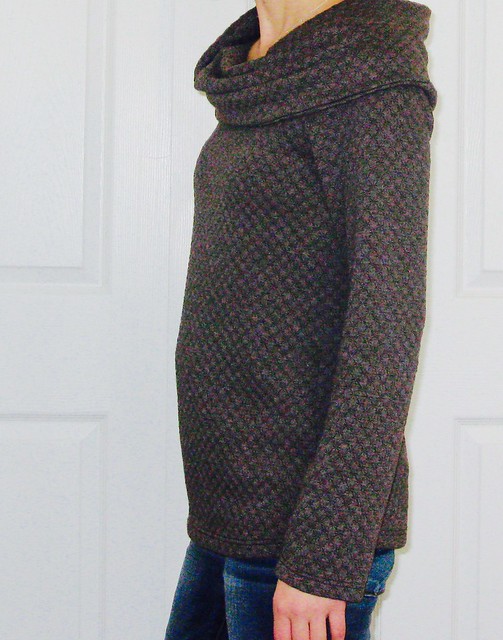 I shortened the arms by a few inches I think (I didn’t write down how much, I just lopped it off) and used my coverstitch to finish them. 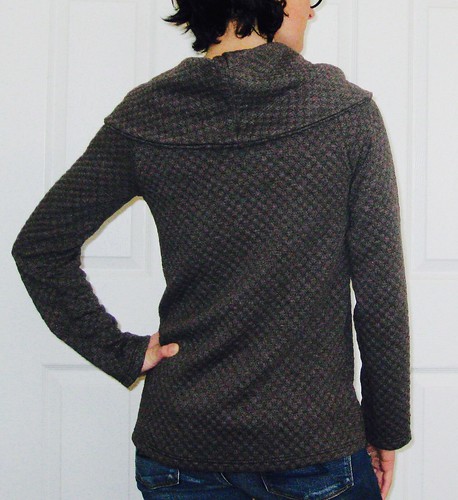 I also decided not to use the bottom band, just turned the bottom hem up 3/4″ and finished with my coverstitch.  I’m a little undecided about the band.  I’ll try it with a thinner knit I think, but with this thicker fabric, I felt like it might poof out funny around the middle if I added a band. 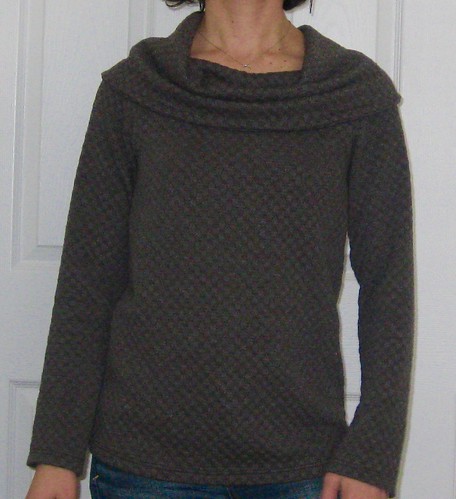 Here’s a pic without the chrome filter (just playing around with it, probably because I’m sick and it seems like a good idea right now).

I’ve worn it a couple of times since I made it, LOVE it by the way, but I think I need to stitch the edge of the cowl like the pattern suggests.  It wants to roll up after awhile.  Also, after looking at other people’s lovely versions, I learned that I need to pull it down a little over my shoulders, otherwise the serged edge wants to peek out since it’s on the outside (the cowl is supposed to hide this).  This fabric doesn’t make the cowl easy to pull down, or I just have broad shoulders.  It’s probably the latter.

I do love it though.  It’s really so warm and comfy 🙂  I guess I don’t have it so bad, at least my face doesn’t hurt when I walk outside!  How are you surviving your winter?  Sewing up some fun stuff?!

4 Replies to “Another Cowl Top – The Beauty Boatneck”

We’re ready for our warm weather thanks to the new Peony Ruffle top and Pansy Petal shorts patterns from @tiedyediva ☀️☀️☀️ #sewingforgirls #handmadewardrobe #mamamade #pdfpatterns #tiedyedivapatterns #peonyruffletop #pansypetalshorts
The new One and Done pattern is so adorable, my little told me it’s her most favorite thing I’ve ever made for her. She doesn’t lie, so I’m pretty sure we’ll have more of these in our future. I’m thinking a matching version for me using #burnsidebibs 🤔 The One and Done has several tying options and pockets, because pockets are awesome 😎 #patternrelease #oneanddoneromper #tiedyedivapatterns #cottonandsteel #sewingforkids #mamamade #handmadewardrobe #linkinprofile
I knew I had a picture! @littlebaileysue now this is a big 🍋 #homegrown #ponderosalemon
I’m getting ahead on my summer sewing 💃🏻😏 I played around with this draped cowl neckline using two different patterns and fabrics. I was really curious about this recycled polyester with gray stripes, as well as this ITY with large deep blue waves, and I was very happy to find I love both! All the details on @califabrics blog 🥰 #myrtledress #colettepatterns #camilladress #5oo4 #califabrics #imakemyownclothes #sewcialists #handmadewardrobe #memade 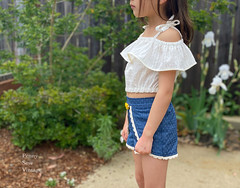