I can’t believe it’s taken me this long to get to the Washi dress!  I’ve long admired the ones I’ve seen, but I just couldn’t seem to get to it…

Until I saw Made By Rae’s rayon challis version!!!  I’ve been sitting on some rayon challis for awhile and just couldn’t wait to use it for something perfect.  This was it! 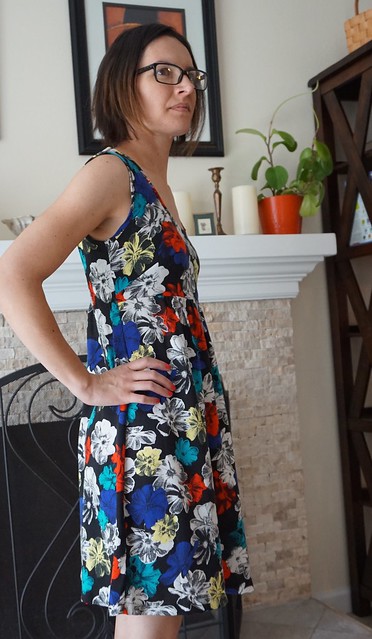 I traced and cut out an XS based on my measurements, took off the recommended cuts in Rae’s post, and also did a small bust adjustment because the difference between my high bust and bust measurement is less than 2″.  After trying on the muslin though, it was too tight.  I removed the SBA, and lo and behold it fit perfectly.

I’ve never sewn with rayon challis before, at least not that I can remember.  Twenty years ago I used to sew a lot for myself, but surprisingly enough, sometimes I feel like it’s all new again!  Anyway, this fabric was a bit shifty when cutting, so it was kind of a pain to keep on grain.  It kept wanting to slide off of my cutting table. 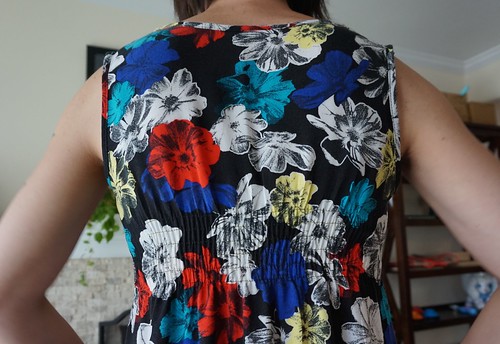 Sewing it up was a breeze though.  This was my very first time shirring with my Brother, and I was a bit apprehensive, even after reading this tutorial.  I didn’t actually make any of the adjustments in the tutorial except to increase my stitch length.  I really didn’t need to be afraid of the shirring because it was very easy.  I didn’t have any problems at all, which was awesome! 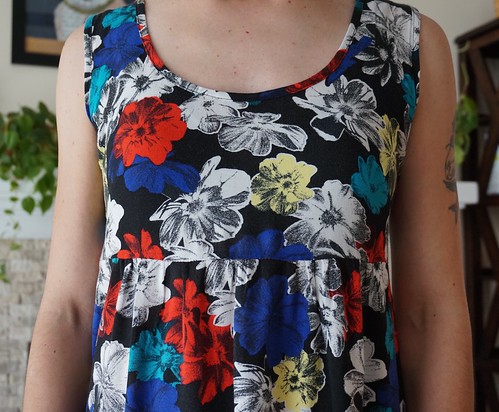 The binding was a bit tricky to cut on the bias, the shiftiness and all of the fabric.  It also took me awhile to press it into shape, but sewing it on was easy enough.  I’m thinking next time I won’t pre-press it, I’ll just use Lladybird’s method to add bias facing.

After letting the dress hang for a couple of days, I added the bias tape.  Then when I put it on, I found the neckline was too low to wear to work.  I decided to quickly take it up 1/2″ at the shoulder seams which then made it a little too high under the arms, so next time I won’t lower the front neckline 1″ like Rae did.

There are two other things though actually, I’m wondering if I should’ve done a liner, and I think this print maybe looks a little like a Hawaiian dress (something I don’t hate, but not really what I was going for).  Other than that, I’m happy with it 🙂 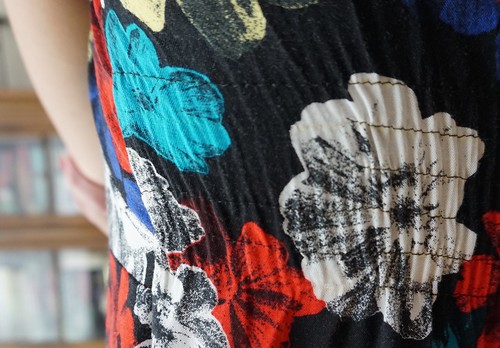 But then I wore it to work, and of course it was a day where I ended up shelving piles of books, which I never do normally except that one of our libraries is closing for remodel…and by the end of the day my shirring had pulled away from the side seams (you can really see this in the blue flower above).  Horrors!!! 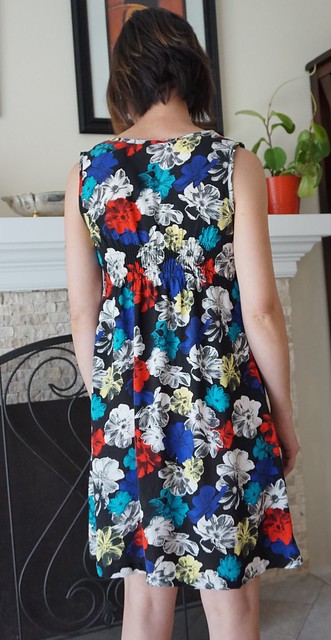 After researching this a bit, I found that I should’ve either backstitched or tied off my stitches.  I did neither, figuring that serging over them would secure them.  What I ended up doing was seam ripping them to the same distance, about 3.5″ from each side seam, then I pulled the front thread through to the back and tied them inside.  This keeps the shirring in the middle, and it still looks fine.

I must say that I’m glad I’m done with this dress though!  After all of the tweaking, I’m looking forward to my next Washi.  Now that I have some experience under my belt…I’m crazy about this dress, but I’m more excited about how great my next one will be!

Have you ever felt this way about a pattern you’ve used?  I guess that’s how we get those TNT patterns, right?  I keep reminding myself I’ll get there, it just takes time.