What You Need to Create a Superhero 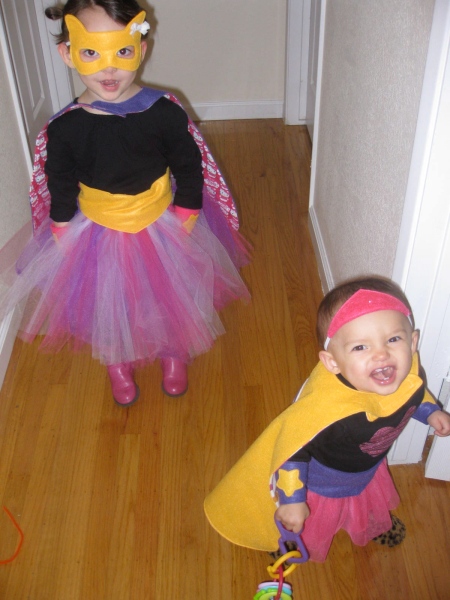 These costumes have taken more than a year to come into fruition. I am soooo happy they’re finally done I could squeal (actually I did once I saw the girls running down the hall with their capes fluttering stiffly behind them!!!)!

Over the summer of 2013 my older daughter, Ev asked me to make her a cape. She loved pretending to be a superhero and would run around the house with a pillowcase cape. I figured it was time to sew up an actual cape worthy of the superhero she wanted to be. I searched for tutorials online and found a lovely cape tutorial on Thread Riding Hood.

While I was making one for my then 2 year old, I decided to go ahead and make one for her future sister, Penny.  I figured I would head off the fighting early!

I used felt I had from JoAnn’s which I had purchased several yards by the bolt in a variety of colors.  You just never know when you’ll need lots of felt! 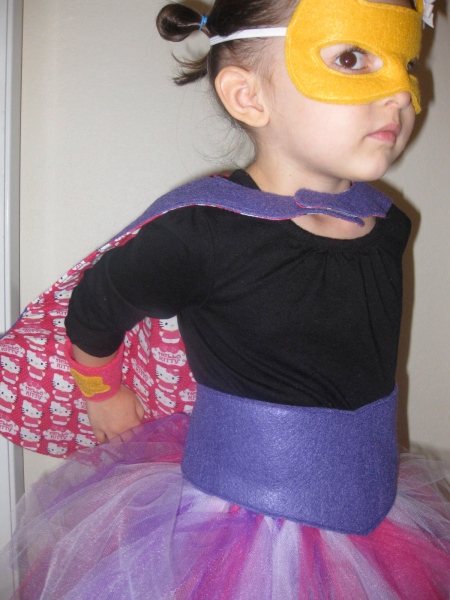 I had Hello Kitty fabric my parents picked up in Portland, OR I decided to use to line Ev’s cape with.

The superhero letters I spent quite some time searching for.  I wanted just the right letters.  These are actually the second set of letters I made, as the first ones were awkward looking.  I used my x-acto knife to cut the letter patterns with.  The white felt is actually sticky back felt, and I adhered the colored felt using Wonder Under and a pressing cloth, then machine stitched over.

When Ev told me she wanted to be a superhero for Halloween this year, I decided to add some other superhero garb to her costume.  Penny originally was supposed to be a villain, but when I saw her wearing her cape, I just had to make her a superhero sidekick! 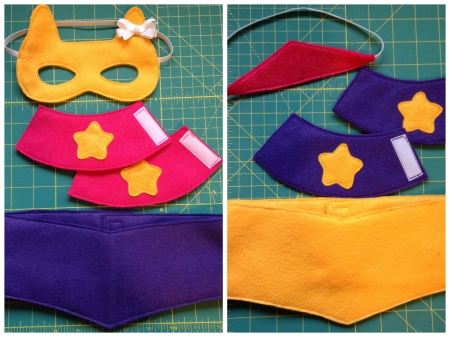 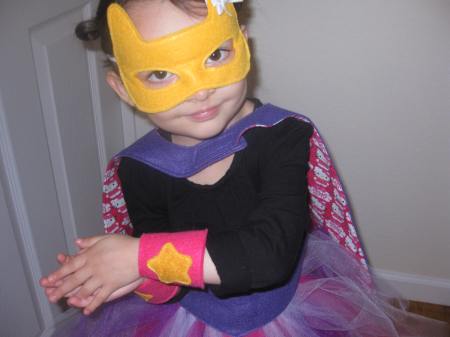 The cuffs are from See Kate Sew, pattern post here.  I shortened the length for each of my girls’ wrists.  I used a star block for the shape and just stitched those on.  I only needed to sew on the hook side of the velcro since it would attach to the felt easily.

The belt is from Craftiness is Not Optional, pattern post here.  I used the pattern for both girls, and I didn’t adjust the length at all for Ev’s.  I did shorten the waist an inch for Penny’s 12 month size.

Ev’s skirt was made by using 6″ rolls of tulle, cutting them into 24″ lengths, and tying them around elastic that was sewn together into a circle.

I probably would’ve done the skirt differently had I more time.  I needed to use safety pins to attach the skirt to the inside of the belt which made it pucker (you can see it in the top photo).  If I were to do this again I would sandwich the skirt inside the belt and sew it together. 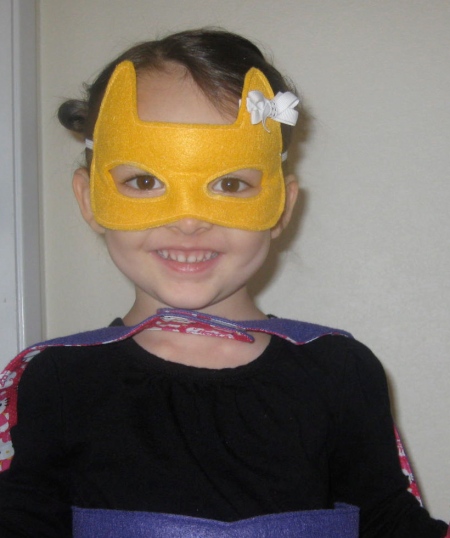 The mask for Ev’s costume was inspired by these masks here on Sew Like My Mom.  I folded the mask in half after printing out the tutorial, and changed it to appear more cat like.  We also added a little bow hair clip to be more Hello Kitty-ish.

Since Penny wouldn’t wear the mask for longer than a few seconds (proof we tried),

I made a head band tiara for her.  I painted on glitter glue to make it more sparkly.  I probably would’ve made it longer had a thought about how large her head is (storing that large brain of hers!), but it’s still cute.

She loves being a superhero, although I think there may still be some villain lurking around in there.

This was their first time trick or treating, and they had a blast!  I had fun making these costumes as well, and they’ll definitely stick around for pretend play!